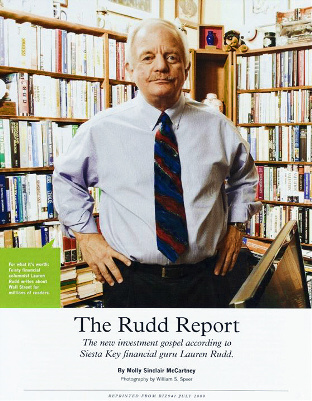 “Entrust your financial freedom to a company you can trust.”

Whether you’ve received a windfall payout or have spent a lifetime accumulating a degree of financial wealth, the nurturing of those financial assets should rest in the hands of a company with the integrity and experience to preserve and grow your assets. Mr. Rudd is a 40-year veteran of Wall Street, whose experience encompasses portfolio management, investment research and analysis, investor relations and communications as well as being a nationally recognized Wall Street newspaper columnist. He is considered to be an expert trial witness on investment fraud, and is a nationally recognized public speaker, radio and television commentator and publisher of The Rudd Report.

As a founding and board member of the Southwest Chapter of the American Association of Individual Investors, Mr. Rudd is a regular speaker for AAII chapters nationally, as well as being an instructor for AAII sponsored educational programs.

Since 1995, Mr. Rudd has managed The Rudd Report website that provides information to readers and students, including copies of Mr. Rudd’s newspaper columns, which now have a circulation that is estimated to be in excess of 6 million readers. The website is visited by approximately 120,000 people each month. While in Savannah, Mr. Rudd was the “Wall Street expert” for WSAV TV, the Savannah NBC TV affiliate, putting together and delivering live commentary for the morning and evening news. He was also an instructor at Armstrong University, teaching security analysis.

From 1985 to 1991, Mr. Rudd was a consultant to the Bell Laboratories division of AT&T where he was responsible for several programs related to the intelligence sector of the Federal Government.

From 1991 to 1995, Mr. Rudd was an Investment Consultant for two major brokerage firms, Legg Mason and Ferris Baker, Watts, where he developed and implemented strategic sales and marketing programs to reach high net-worth clients. His work merited an invitation to Legg Mason’s Pacesetters Club.

About Rudd International A Multidimensional Firm With Financial Expertise In:

Portfolio Management
Our investment philosophy follows that of Benjamin Graham and Warren Buffett. We believe that there is no better way of building wealth than through the ownership of equity securities issued by quality companies. Our mantra has always been that it is more difficult to lose money on Wall Street than it is to make money. However, the caveat to that statement is that investing is a long-term proposition, where long-term is defined as 3 to 5 years, not 3 to 5 months, weeks or days.

Investment Research
Rudd International will consider adding a limited number of companies each year to its its list of those on which it maintains research coverage providing the company is able to meet a strict list requirements that include financial strength, management integrity and investment potential for our clients.
The Rudd Report – Investment News & Research
An archive Streetwise and MarketView newspaper articles.